Our client needed more storage. Simple - we added a lean-to roof to the side of this house with a PVC front and back door. The result was a great, full insulated and waterproof storage space with plenty of room for bikes, toys, you name it! Lucan Heights, Co. Dublin
Building & Converting 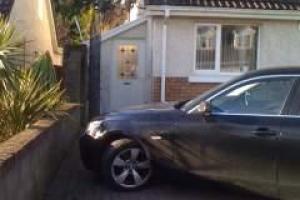 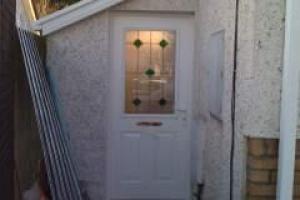 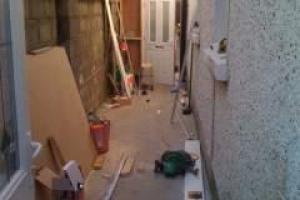 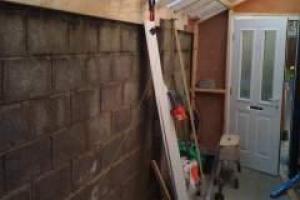 When was the work done?
Paul has done many jobs for me over the last few years.

What type of work was involved?
Well, the last job I need was to have the whole kitchen retiled. It was quite a big job because all the old tiles had to come up first and a whole new base put down. And he just finished it to perfection - he just does a great job.

Paul also put in a lovely wardrobe for me, the full length of my bedroom. He did it exactly as I wanted, and really the workmanship, the woodwork is first class. It's good to get someone who's so multi-skilled.

Paul also built a small bathroom for me downstairs, as well as creating a separate storage area. He took my side entrance which was just an open concrete area and he finished it off so it's like the inside of my house. Paul lined and insulated all the walls, and put in some nice downlights. He tiled it, he painted it, he put skirting on it. Now when you step into the side entrance, it feels like part of the house.

Did Paul introduce new ideas?
Definitely. For example, when it came to the small bathroom, I didn't know how to go about it. I wanted a downstairs bathroom, but I wanted to keep my storage.

Another example is my little porch - I was going to knock it down - Paul suggested keeping it and just putting a new roof on it. He sussed it all, did a great job and I've never had a problem with it.

Paul's always willing to figure out how to do what I want. I will discuss something with him and he'll always take my ideas on board.

How do the projects run?
Perfect. For example with the tiling, the work was completed when I came back, and everything completely cleaned up and the tiles down, like they'd been there for a year. He never leaves a mess behind. I can leave the key with Paul and trust him to put on my alarm and leave the house in order.

I like the order in which he does things too. When he did my little bathroom, he put down plywood outside to protect my new paving. He just takes great care. He knows himself how things should be done. I just trust him to do a job and to do it properly.

A lot of builders aren't that interested in the smaller jobs. Paul will do the small jobs for me. And he'll always accommodate you if you want something urgently.

What was the biggest benefit to you of using Paul Black?
Paul is flexible. He always seem to be able to fit in my jobs. Overall you're talking about reliability, and trusting someone - not just as a person, but also the quality of their work. Paul really stands very high on all counts in my opinion.

Paul is a very approachable guy. And it's the fact that I can get him to do the smaller jobs too. The quality of Paul's work really stands out and he's reasonably priced.

What's your favourite part now?
I suppose my new wardrobe - it's total perfection to look at.

Would you recommend Paul Black to others?
All in all, I couldn't recommend Paul strongly enough to anyone. I have recommended him to other people and I will continue to recommend him because the quality is just so good.

I would be very happy to show anyone the work he's done here for me. Paul's done so many things for me, and has obliged me so many times over the years that I would love to reciprocate in anyway. 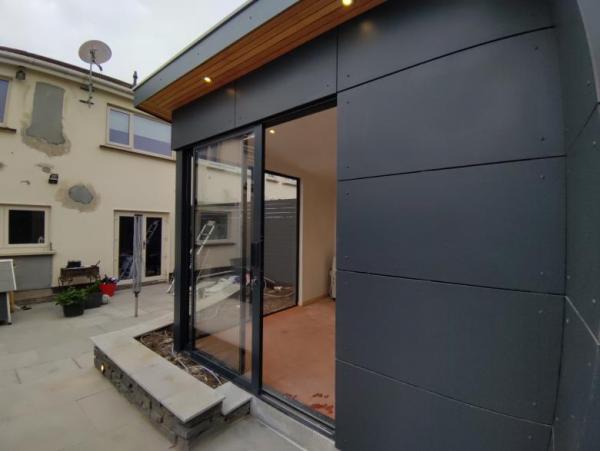 I would say the things that stood out was Paul's skill as a carpenter and the communication we had during the project.

Paul built a sunroom for a friend of mine and she recommended Paul to me. Paul's quote was good and we trusted the recommendation.