Loose tiles and grout on lower half of this shower meant that the plasterboard had got wet and tiles had started to come loose. We re-tanked the shower, replaced the plasterboard with cement backer board and retiled with large grey tiles. Crumlin, Dublin 12
Bathroom renovation

Darren's work was fantastic, his prices are reasonable and he's genuine. 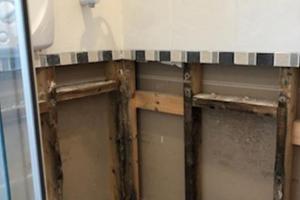 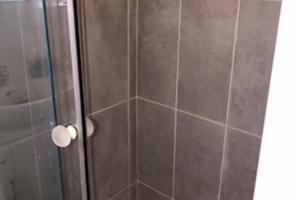 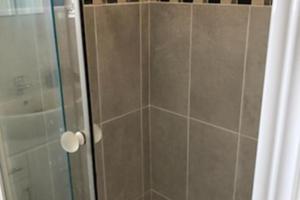 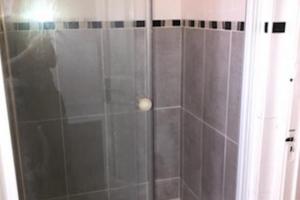 When was the work done?
Three or four weeks ago.

What was involved?
I have a shower that I wanted to regrout. So, I removed the old grout but I ended up leaving it for about six months. In the meantime a few of the tiles came off and the plasterboard behind was soaking wet. I couldn’t get the tiles back up myself so I called Darren, and asked him could he have a look at it and see what he could do. Darren came over, had a look and said to leave the top tiles because the damage was only at the bottom. He also recommended replacing the plasterboard with cement backing board and tanking the shower so it would be fully waterproof from here on.

How did you choose TileCraft?
My dad had heard about him through Age Action. I had rang two other people that didn't ring back. I don’t think they want the job because it was small. Then I rang Darren and he rang me back that day. I told him it was the only shower we have and there was four of us here so we use it every day. He said he wouldn’t leave us hanging. He’d do it as quickly as he could. He had it done three days. We were delighted.

Had you definite ideas in mind before you talked to Darren Kearns?
Get the shower sorted!

Did Darren introduce new ideas?
Yes, he picked the tiles himself. It was originally white and the border half way up was grey and black. I wanted to go with white tbut my wife thought they wouldn’t match the walls and they'd look wrong. Darren said leave it with me and he picked the grey tile and cut them to the right size. Well he passed my wifes inspection! They were just perfect. He did a grand job.

How did the project run?
It’s like new now. Darren’s clean as well - he had mats and sheets down everywhere. We were delighted with him.

What was the biggest benefit to you of using TileCraft?
Darren's work was fantastic, his prices are reasonable and he's genuine. When he says he’s going to do it he’ll do it.

Would you recommend TileCraft to others?
I would. Or if any of my family needed something or if I had to get anything done again, he’d be the first I’d ring.We had some good chats and he’s certainly a nice fellow, very funny and he always had a story or a joke. 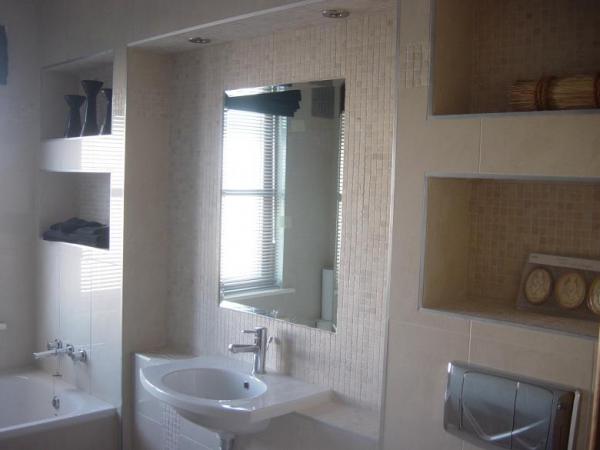 Darren’s workmanship was excellent and he was a pleasure to deal with.

It feels like a completely different space and apartment now.

Darren really went above and beyond for me and did lots of little things he didn't have to.

I could tell by talking to Darren on the phone and explaining what I was looking for that he really knew what he was talking about.

Darren took care of everything...He really took the worry out of having a big job done.

Darren's work was fantastic, his prices are reasonable and he's genuine.

I'm delighted to have found someone reliable that's happy to do smaller jobs.

It's very hard to find people who are multi skilled and then you have to get multiple trades in. But Darren seems to be able to do a lot of stuff internally - tiling, grouting, carpentry, painting.

Darren remained professional and dealt with every problem that came up with no fuss. His workmanship and attention to detail is second to none.

Darren was the only person who walked in and immediately said he could fix the issue.

Darren does the job properly and he's good with clients as well. That's what it's all about for me really.

Darren was the one that was most engaged and gave us the best quote as well...On every occasion that I've used Darren, he's excellent.

I found Darren through pickapro.ie... and what a find.