When was the work done?
The work that Anne did for us was in 2007. We lived in Hammersmith, London at the time and currently live in Devon.

What was involved?
we had a large, 110 ft garden which was quite wide as well. Anne redesigned, landscaped and planted it it all. Since the garden was quite long we decided to break it up into different rooms like you would do in a house. The planting was mainly traditional but we also did some quite different things, like a cafe area in the centre of the garden where we had some aluminium furniture and fun ferns. It was a bit like the inside of my house, traditional and wacky.

How did you choose Fox Gardens?
I met Anne through the nursery our two children attended. Over time we got to realise that we were both into gardens. After seeing some of Anne's work we took it from there. I know a lot of people who are landscape gardeners and I had spoken to them in an informal way about the project but chose Anne for the job.

Had you definite ideas in mind before you talked to Anne Hamilton?
I did have quite strong opinions about what I wanted. I like straight lines in a garden, not curvy ones. I wanted the garden to have quite a formal look about it. The garden already had some lovely, mature shrubs and plants that I wanted to keep and incorporate in the new design. My husband also had an office in the garden we needed to work around.

Did Anne introduce new ideas?
She did, yes. Since Anne knew the type of style I was into, she was able to come up with alternative ideas that would suit me. First of all she put together four designs based on our discussions. Some of the ideas she presented to us were of things we hadn't considered. For instance, one of the ideas we went with was a path down the first bit of the garden which was done with wonderful, great big Scottish river stones. I hadn't thought of that at all. Another idea of Anne's we agreed to had a cohesive effect on the garden. We had some old paving at the house end of the garden and Anne brought in a workman who was able to perfectly replicate the same exact look further out in the garden. It nicely tied the everything together.

How did the project run?
Excellent. One of the reasons I chose Anne was because I knew she would take a lot of the project stress away from me. We had no access to the garden from the side, everything would need to come through the house. I trusted that Anne was clean, reliable and efficient and that she would be with the workmen making sure that everything was done correctly. It was.

What was the biggest benefit to you of using Fox Gardens?
That's a difficult one because there are lots of things. First of all, Anne is an excellent garden designer and plants person. She is very good at thinking outside the box when it comes to sourcing materials people might not know exist. I don't think that is something most designers are good at but Anne is. I would say the biggest benefit from an everyday standpoint would be her communication skills and her efficiency. That's the outstanding quality she provides on a daily basis which is so important while a project is being carried out.

What's your favourite part now?
It's hard to say because it all works so well together. If I had to pick though I would say that the cafe area in the centre of the garden was my favourite. We put tree ferns diagonally opposite one another with bright red rubra grass that ran in a straight line between the two trees. It was very dramatic.

Would you recommend Fox Gardens to others?
I would, yes.

Any tips for other people?
I would say that it's crucial for people who are having a garden designed, to keep in mind the level of garden maintenance they're personally comfortable providing. A garden is a thing that you don't just shut the door on in October, reopen again in April and it just continues to exist without you. If you'll be maintaining the garden on your own, choose plants and shrubs you can cope with or consider hiring a gardener for something more elaborate. I left a stunning garden in London and I just hope it's being cared for properly. 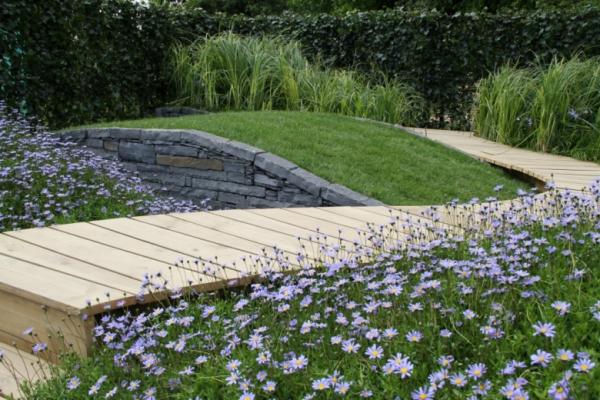