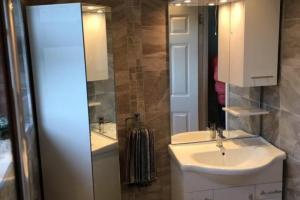 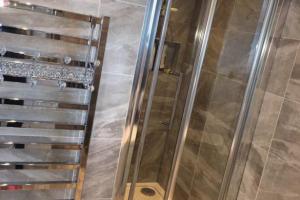 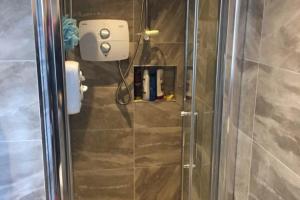 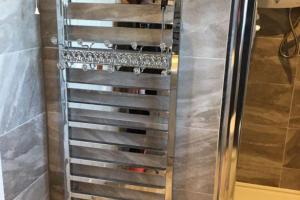 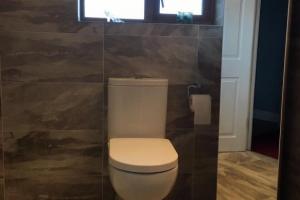 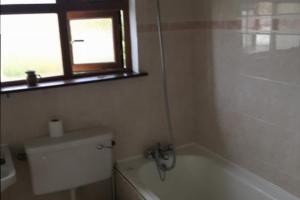 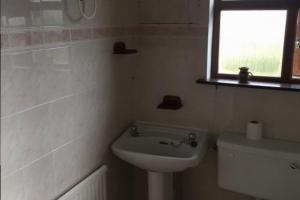 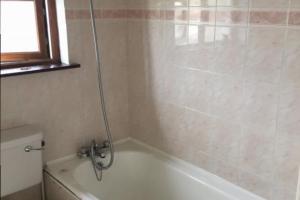 When was the work done?
The work was done before Christmas.

What was involved?
We're in this house over forty years and we've done nothing with the bathroom. We've a bath, toilet and sink in it but you could barely turn in it, it was so small. We had lino on the floor and he had to gut that, and apparently the boards and all under the bath was rotten. All that had to be cleared and the tiles taken off the wall. The bath was taken out.

We love the radiator, it's a standing one. The shower is very big, bigger than normal. We're getting old, so you could put a seat in there if you wanted to. The toilet is nice and high. We love the tiling – I wouldn't have gone for it myself at the beginning but when I saw it I thought it was lovely. And there's the lighting in the ceiling, little spotlights. Barry also got this cabinet for us with a mirror but when you swivel it there are four different shelves behind it. There's a fan in the bathroom as well, so when you turn on the light it automatically comes on as well.

How did you choose BS Building Services?
I just heard about him from a friend and I saw other work that he had done.

Had you definite ideas in mind before you talked to Barry Smith?
I did. I had old-fashioned tiles but when he came up with these I didn't really think I'd like them but now I love them. He suggested everything, you know the spotlights in the ceiling, the little bit taken off the bedroom.

Did Barry introduce new ideas?
Even though the bath had been taken out, the bathroom was still very small and Barry had this idea to break into the big back bedroom, into the corner of the bedroom, to fit the shower into that so it comes in a bit to the bedroom and that makes the bathroom very big.

How did the project run?
It went perfectly. I've a good carpet on the stairs and landing that I didn't want anything to happen to and the electrician and plumber came through there and all was well. Everything was fine.

What was the biggest benefit to you of using BS Building Services?
Looking back that the work was done in time with no hitches.

What's your favourite part now?
The shower which I think is fantastic – we have two showers in this shower unit, which I never even saw happening before. We can use one off the central heating, but in the summertime we can turn on the electric shower.

Would you recommend BS Building Services to others?
Definitely. I had somebody else down and she was looking at the bathroom and she's thinking about it. I'm delighted and thrilled. I'd no idea it would turn out this way. People say it's like something out of a magazine; you couldn't believe it was the same room. We got other bits done, a new boiler put in, and we got BS Building to do that. 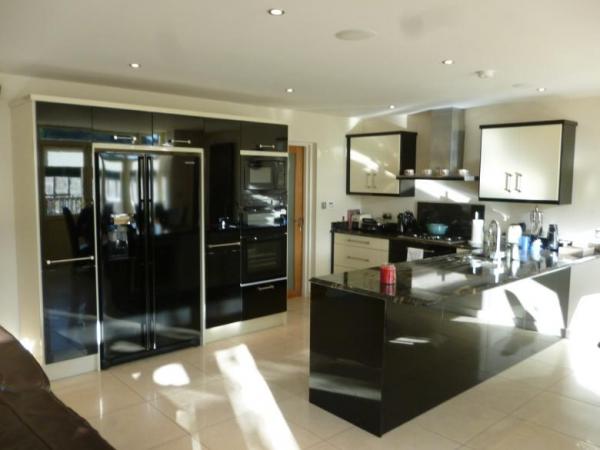