When was the work done?
The work was done in November, 2010.

What was involved?
Stephen built a porch at the front of the house. It extends about two foot out from the house, brick on the sides, with three foot long windows and an opening at the top. There are two doors that make up the front. One opens out onto the driveway and is the primary door. The second door would normally remain closed but can open up if you have something large to bring into the house. It's a handy feature to have.

How did you choose Shinte Home Improvements?
Stephen was recommended to me by my sister's beautician in Celbridge. Stephen had done some work for her and she was vey happy with it. I'd been meaning to get the porch done for some time, so I called Stephen and one other guy to quote for the work. The quote from Stephen was excellent while the other quote was a bit on the high side. Stephen's really suited me.

Had you definite ideas in mind before you talked to Stephen Conaghan?
Absolutely. There is a house nearby that had a porch style I liked. That's where I got the idea for what I wanted.

Did Stephen introduce new ideas?
He did, yes. Most of them were small suggestions but things that would change the overall visual effect. Looking back I have to say those changes turned out really well because we're delighted with the finished product. One suggestion had to do with the colour of the tile slates on the roof. Stephen recommended a darker colour than the first tile because he said it suited my house better. He showed us comparisons and he was right.

Stephen also suggested changes to the floor tiles to make it look nicer. When he did those changes it was spot on. Lastly, the slant on the roof of my porch is less than I planned it and works better. All of Stephen's advice was good and bore fruit.

How did the project run?
Very well, Stephen's very professional. He always arrived on time, cleaned up as he went along and everything was left clean and perfect before finishing for the day. The project was completed on schedule and the last thing that Stephen did every day was to wash down the driveway. We're delighted with the finished product. It's absolutely spot on.

What was the biggest benefit to you of using Shinte Home Improvements?
The quality of Stephen's work was excellent and the price was very reasonable.

What's your favourite part now?
All of it really. From what we had at the start to what we have now at the finish, the whole thing. It's been great for keeping in the heat as well this last winter. It really turned out well and I'm delighted with it. Friends and relations who've seen it have all commented on how nice it looks.

Would you recommend Shinte Home Improvements to others?
Yes, absolutely. If anybody is looking to have work carried out, Stephen is well worth a call.

Any tips for other people?
Be forward thinking and have a good idea of what you want done beforehand. Be open to suggestions but don't just leave it up to somebody else to decide. At the end of the day you're the one who is going to be looking at it day in and day out.

It was value for money. There was no running up on costs. Stephen worked very clean and was on time everyday.

I knew exactly what I wanted, to the very last thing. And Stephen did everything exactly the way I wanted. 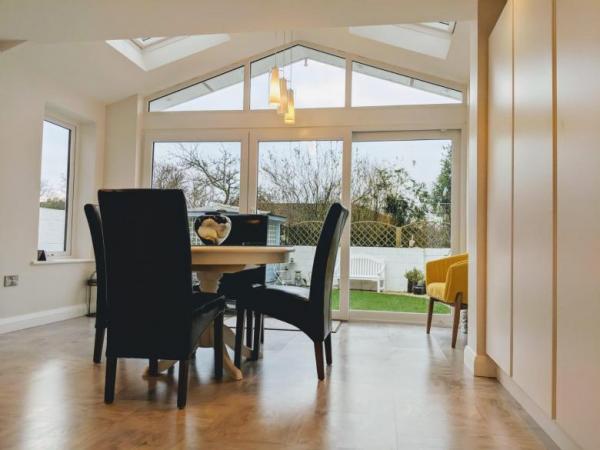 It was value for money. There was no running up on costs. Stephen worked very clean and was on time everyday.

I knew exactly what I wanted, to the very last thing. And Stephen did everything exactly the way I wanted.