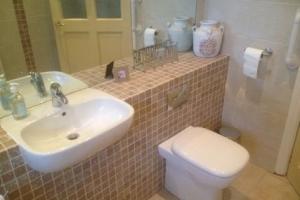 When was the work done?
The work was done in late October, 2011.

What was involved?
I had a bathroom downstairs that I never used. It was located under the stairs and contained a hand basin and toilet. A plumber had done some work on the toilet but didn't seal it properly and it was causing problems and giving off a smell. I hated that room! I decided to get the bathroom renovated and spoke to several people about the project before talking to Alan.

I had wanted to put a bath in the room but wasn't sure it was going to be practical because the pipes as they were set up weren't conducive. Alan suggested rerouting the water from upstairs into a more suitable pipe that could be fed to the downstairs bathroom. Nobody else had ever suggested something like that. Alan went into everything with me and his attention to detail and service was amazing. A full, working bath was added to the room as well as a toilet, fan and lights in the ceiling. Alan has done the most terrific job, it's gorgeous.

One last thing I would like to mention is the work that he did with a window that was in the bathroom. It was completely off and crooked. I don't know how he did it, but when he was finished with it, you would swear that it was completely square! I have an eye for things and I can't fault any of the bathroom work that Alan did.

How did you choose Alan Doyle?
I found out about Alan through my son, they're both members of the same BNI networking group. I had said to my son Stephen that I was going to get the downstairs bathroom done and that I had had a few people over to have a look at it but that their prices were high. My son told me about Alan and said that he would be a good guy to talk to about the project. I called Alan, told him what I was looking for and we discussed the project. Another thing I can say about Alan is that he doesn't overcharge. I really liked Alan's approach and he was happy for me to contact previous clients of his. The reassurance I felt from that, plus my son's recommendation, gave me the confidence to choose Alan to do the work.

Had you definite ideas in mind before you talked to Alan Doyle?
I told Alan what I was looking for and we discussed various options.

Did Alan introduce new ideas?
Alan took my ideas and showed me brochures and catalogues of bathroom fixtures that would be suitable in the space we had had to work with. Alan made the whole job painless and I didn't have to go out and look for anything. Previously, any time I had got work done in the house before, I had to go out and look and order. Not being able to get around very well, I walk with a stick, Alan made it very easy, he brought me samples, I told him what colours I wanted and picked them.

How did the project run?
Alan's a well organised guy and let me say he worked like a trojan. The whole job took about 6 days and it turned out beautiful. When the job was completed he cleaned up, took the skip away and I had a beautiful, new bathroom.

What was the biggest benefit to you of using Alan Doyle?
Alan's reliability and the fact that he put the extra effort in. I didn't have to do a thing. Alan is very organised and always had everything with him, he didn't go missing for half the day picking up this or that. He was on site and always prepared.

What's your favourite part now?
The whole bathroom, it's a gorgeous room now. It's nice and bright with the lights Alan put into the ceiling and friends of mine who walk in say, "wow"! From what the bathroom was before to now, it's like a gift from heaven. 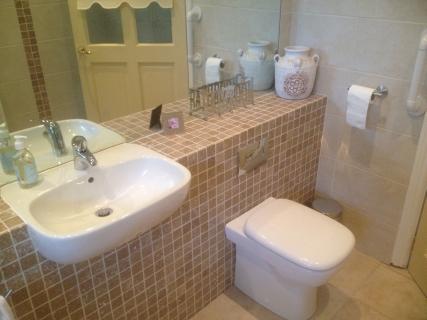 There was extra reassurance in that Tommy offered to show me other jobs they had done and that was very useful in making the decision.

Everyone I bring up to see the bathrooms just say,

With Alan you'll get a good job done and you're going to get value for money.

Alan has fabulous vision..he can walk into any room and turn it into an amazing finished space.

Despite the fact that Alan has a family of his own, he stayed and worked until late at night to get the job done on time.

The biggest benefit was reliability, trust and shear hard work. I can't say enough about Alan.