Our brief was to convert two rooms into a single, open plan kitchen extension. As supporting walls were removed, this involved quite extensive structural work, plus roofing, flooring, electrics and plumbing. The results as our client says is "quite a spectacular sort of room". Stillorgan, Co. Dublin
Building & Converting 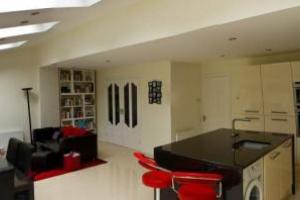 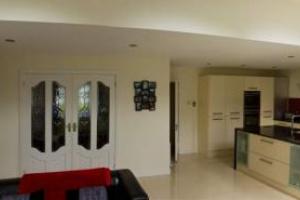 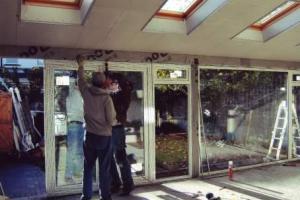 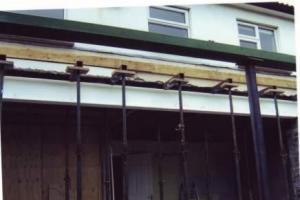 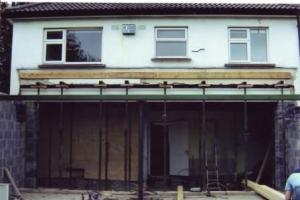 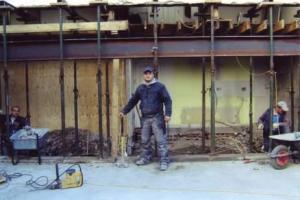 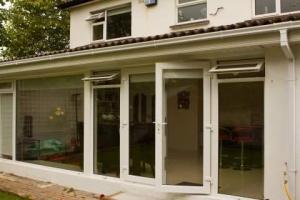 When was the work done?
September and October 2009.

What was involved?
The build created a single large open plan room from two rooms. There was a lot of stuctural work involved - removal of a supporting wall, replacement of two supporting beams with one large beam and realignment of a pitched roof. Polaris also replaced a floating floor with a concrete floor. They took care of all plumbing and electrical work. They procured and installated the rear windows and doors. They also replaced another structural beam at the back.

How did you choose Polaris Builders?
Through personal recommendations. Polaris was recommended to me by a work colleague.

Had you definite ideas in mind before you talked to Andrew Rudenko?
Yes, we had the building work specified and planned by an engineer. So we had the basics of what I wanted.

Did Andrew introduce new ideas?
Yes, he suggested realigning the skylights in the roof. He also recommended extending the roof pitch in case we were ever going to do external thermal insulation - thinking ahead on that one. He also recommended removing the floating floor and replacing it with a concrete floor.

How did the project run?
Everything went very, very well. They were very keen to start in the mornings, maybe too keen in terms of noise levels! They were bang on time. The project ran over by a week but that was because the kitchen was late coming in.

Andrew was very keen to get the finish right because it's quite a spectacular sort of room. I was very positive on the whole build.

Andrew also went the extra mile. For example he did plumbing that he didn't have to do for me.

What was the biggest benefit to you of using Polaris Builders?
Andrew is very flexible and reasonable and conscientious. I recommended him to people afterwards and they rave about him. I have no quibble or problem recommending Andrew. That's probably the best thing you can say about anybody.

What's your favourite part now?
I'm also very happy with the finish. The whole thing about the build is that the two rooms had different ceiling levels. One was a nice clean level, and the other for reasons to do with a waste pipe wasn't. I said to Andrew that I didn't even want to start the build if he wasn't sure that he could get the clean line all the way across the kitchen.

Andrew created the space that I asked him to create, and he was into it as well. He came back after the whole thing was done recently and I could see he was delighted. He was really proud of it and so he should be.

I'm also very happy with the way he procured and delivered the windows at the back.

Would you recommend Polaris Builders to others? Yes, without a doubt.


Any tips for other people?
My advice would be to get an engineer to specify it. You don't need an architect if it's just taking a wall out but you do need an engineer. In terms of the materials, and the steel, I think the build was very, very well specified. 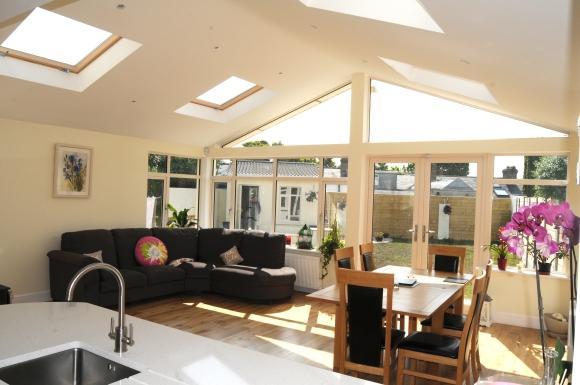 Andrew wanted to do the job well, quality was very important for him as well as me. Whatever project Andrew does next, they're really lucky.

To be honest, the whole thing is great, everything was perfect. ..Andrew really bended over backwards for me.

I did my homework and Andrew came out of the best, overall including on price.

I just love the whole thing...It's bright, airy and the house has been completely transformed.