Our first project for dormer bungalow by the bay in Skerries was to add a new porch to address the draft. Following on from that our client decided to add a new sunroom to the rear of the house complete with PVC windows and doors, hardwood floors, slated roof with two velux windows, skirting boards and all electrical and plumbing work. Skerries, Co. Dublin
Building & Converting 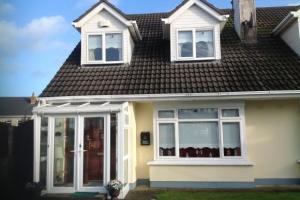 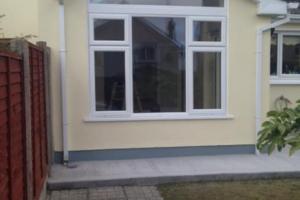 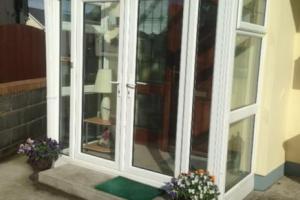 When was the work done?
Jason has done two jobs for me. He built a porch for me last summer that I was so pleased with that I had him back to build a sun room for me in September of 2013.

What was involved?
I live in a dormer bungalow by the bay in Skerries and there was an awful draft that used to come through the front door of the house. I decided to get the porch done to address the draft and to make things look nicer. Like I said, I was so pleased, chuffed really that I got Jason to do the sun room for me at the back of the house. It is fitted out with all top of the range stuff; PVC windows and doors, hardwood floors, slated roof with two velux windows, skirting boards and all electrical and plumbing work. I had a hardwood floor in the adjoining room and Jason was able to match the floor in the sun room to it.

How did you choose Harvest Energy?
Word of mouth from a neighbour of mine up the road. He had a porch built and when I saw how nice it was I rang Jason to build one for me as well.

Had you definite ideas in mind before you talked to Jason Peters?
Nothing definite, no. I had a space at the back of the house that I wanted to do something with, that's all I knew.

Did Jason introduce new ideas?
It was Jason who came up with the idea for a sun room. He talked me through everything including showing me samples of insulation and tiles.

How did the project run?
It was great. Jason and the guys were here every morning on time and I always knew where the project stood. What made Jason and his team good was that they were so particular with every detail. I would watch them working sometimes from an upstairs window and they would really focus on the tiniest details, that's what really made the difference. It's a little like that old saying, "what it said on the package, you got"!

I can't stress enough that Jason was great, the team was great and the work was top notch. Jason had told me that the job would take four weeks and he finished bang on time and at the quoted price. I was at the time and still am delighted with it all, it was a smashing job. I'll be getting Jason back again to insulate my attic next.

What was the biggest benefit to you of using Harvest Energy?
The biggest benefit was the trust I developed in Jason. I had a health issue earlier in the year and I really needed something positive to happen to help me to bounce back up. The porch and the sun room turning out as wonderful as they did was just what I needed, Jason was magic!

What's your favourite part now?
My daughter said it best when she said that "it's just lovely to sit out here, it's so tranquil". One of my favourite things to do in the new sun room is to relax and listen to my old cds of music from the 50's. Jason installed the music system for me when the room was finished. The room was only finished last September and I'm really hoping that we have another nice summer like the last one so I can enjoy it in the new room.

Would you recommend Harvest Energy to others?
Without a doubt and I have been. I think I can say the same as well about all of my neighbours who have had Jason do work for them. My sun room turned out so well that my neighbour two doors up had Jason build a sun room for him also. To date, Jason has done three porches and two sunrooms in the neighbourhood! 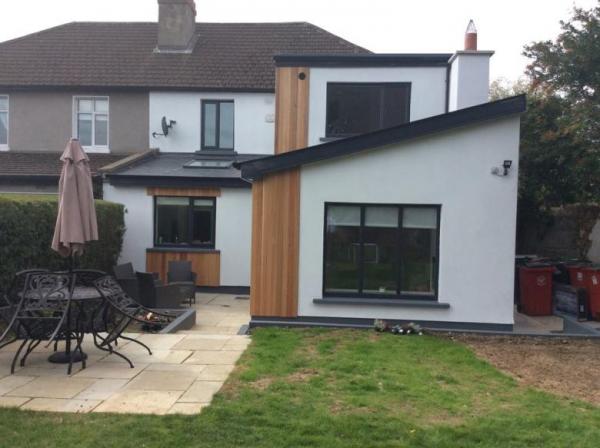 Jason was very open and easy to deal with, seemed trustworthy and I was able to contact and speak to some of his previous customers who were happy with their work.

The fitters were efficient, tidy, self-contained and well disposed – in other words, professional.

The work was exceptional. I would highly recommend.

The work was excellent and there was not one problem whatsoever. They were great workers and very good at their jobs.

I liked the way that they came in, got to work and the job was done and dusted in one day. It was exactly what I wanted.

Good word tends to get around. After Jason completed my project, a friend of mine got him to do a sun room for her.

From the moment I spoke to Colin I felt reassured they would do a great job at a competitive price.

I find Jason very easy to work with and talk to, efficient and well organised with a can do attitude.

Delighted with my new windows and doors from Harvest Energy.

I would highly recommend these guys .. professional at all times, amazing work.

The workmen were very obliging ... we were impressed by the their own standards, they came across as very professional in their duty.

Harvest Energy replaced all our windows, hall door, back door and French doors at a really competitive price.

The quality of the work and the attention to detail was second to none.

Jason was helpful and patient with all requests. The two lads who did the work itself were top notch.

Their price was extremely competitive. I am really pleased with the outcome.

I'm extremely pleased with the finished product – the windows and doors look great.

Very happy with the service provided by the Harvest Energy team

The lads did a brilliant job, even down to the finishing touches.

The quality of work provided was fantastic and the new porch and back door are fabulous.

The entire job was completed in les than 5 weeks, to an extremely high standard.

Harvest Energy were very competent on all aspects of the project.

Jason's input in to the design and decor was critical to the present success of the business.

I will definitely use their company again.

The quality of materials used and the skills from the workers made the whole project run smoothly without any complications.

I have found them to be courteous, professional and very accommodating and willing to please the customer at all times. No task was too big or too small.