With more and more Irish people living in high density apartments and houses, many of us are be feeling the pain of thin party walls. The long term solution may be higher standards in building but that won't help us now. Find out more sound proofing and how it can drastically improve your quality of life.
Service 1, Service 2, Service 3

When Judith got the keys to her new apartment, she was delighted. "I liked the location, the apartment itself was really nice and best of all it was my own - finally!".

Three years later, Judith was a lot less enthusiastic. "The problem was noise from the neighbouring apartments. I could hear them talking, listening to TV, flushing their toilet even! And no doubt they could hear me too, which I hated. I was just lucky that they weren't particularly noisy but it still drove me crazy".

With more and more Irish people living in high density apartments and houses, Judith isn't the only one to be feeling the pain of thin party walls. The long term solution may be higher standards in building but that won't help anyone who's suffering with this problem. And for most people, moving is just not an option.

However, many apartment dwellers, including Judith are now applying a far less drastic solution than moving house - soundproofing or more correctly noise reduction insulation. While soundproofing is not a new idea obviously, the option of going to a firm that specializes in noise reduction now makes it a much more straightforward process for homeowners.

What are typical noise problems and what type of noises "respond" best to soundproofing?
The most typical form of unwanted noise from neighbouring properties is voice noise. Even TV noise is still mainly voice noise but from the TV. Thankfully this is where soundproofing systems are at their best.

Impact noises such as banging doors or running up and down the stairs although intrusive, only happen for a short period and are stopped again. Unfortunately such noises cannot be helped from your side of the property!

What exactly is done to the room?
The general process is to add an additional layer of special soundproofing board to the party walls in your house, significantly reducing noise pollution. This process involves removing the existing plasterboard, inserting the soundproofing layer, and replacing and making good the plaster so it is ready for redecorating.

Does the work cause a lot of disruption?
A typical treatment to the parti wall in an average room takes less than a day to fully install and is minimally disruptive. The room can be fully used by that evening again where the wall itself is left ready to be re-decorated. Specialist soundproofing systems take away approximately 3 inches or 81mm from the room width or can even be down to as little as 2 inches or 50mm in certain circumstances.

What to expect from a sound proofing treatment:
Unfortunately the word soundproofing is a little misleading, nothing is completely soundproof. It is better to say that various levels of sound insulation can be achieved against a noise, dependent on the tone or pitch of the noise and the volume of the noise at that tone or pitch. Low pitch noise such as the bass thump from modern music is more difficult to deal with than the high pitch squeal of a baby crying for example.

Voice noise (or airborne noise) can be greatly reduced using tried and tested soundproofing systems for Parti Walls. Laboratory tests indicates as much as an additional 75% improvement on what the wall may have been doing originally is a realistic expectation. 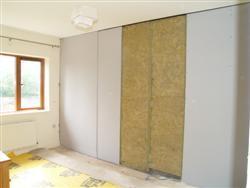 At Cunas, we understand the problems caused by noise pollution such as stress and sleep deprivation We tailor a package to your requirements taking into account the type of noise you are experiencing and the construction of your property. The period of the property dictates a lot of factors relevant to the transmission of sound and we are experts in understanding all types of construction.

David's very meticulous in his work. Looking at the room now, you'd never know that work had been carried out.

Home and Garden Advice From The Experts

Furniture Makeover With The Upholstery Experts

Lumpy couches, wobbly chairs, scratched leather and dated colour schemes - it's all in a day's work for the team at Portmarnock Furnishings Ltd. We've presented our experts with 6 furniture issues to tackle. Read how your furniture can get a whole new wow factor, often for a fraction of the cost of replacing with new.

Lumpy couches, wobbly chairs, scratched leather and dated colour schemes - it's all in a day's work for the team at Portmarnock Furnishings Ltd. We've presented our experts with ...

Extensions...Advice and Ideas From A Structural Engineer

Bathroom, Shower and Wetroom Leaks - Advice from an Expert

I've talked to Darren Kearns from Tilecraft, a Dublin specialist in bathroom renovations and leak repair about the topic of leaks. He explains why your bathroom and shower may be leaking and what your best course of action should be.

I've talked to Darren Kearns from Tilecraft, a Dublin specialist in bathroom renovations and leak repair about the topic of leaks. He explains why your bathroom and shower ...

Bathroom Renovations - Ideas from the Experts

pickapro have talked to Rachael and Shane from Tile Rooms, bathroom and tiling specialists with showrooms in Newlands Retail Centre, Dublin 22. They gave us lots of interesting ideas but no rules! Their approach is firmly that it's all about getting what's right for you.

pickapro have talked to Rachael and Shane from Tile Rooms, bathroom and tiling specialists with showrooms in Newlands Retail Centre, Dublin 22. They gave us lots of interesting ...

Building An Extension In Ireland

Building A Sunroom Or Conservatory

Preparing Your Garden For Winter

The Things Which Are Surprisingly Bad For Your House and Garden

Sell Your House For More

Great Gardens For Children and Adults

Awake To Bird Song In Your Garden

How To Choose An Architect

How To Choose A Tiler

How To Choose A Landscaper

How To Choose A Garden Designer

Windows - How To Choose

Perk Up Your Garden For Spring

Made To Measure Curtains